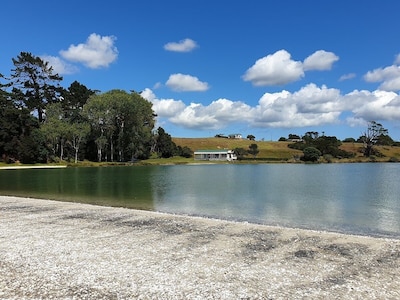 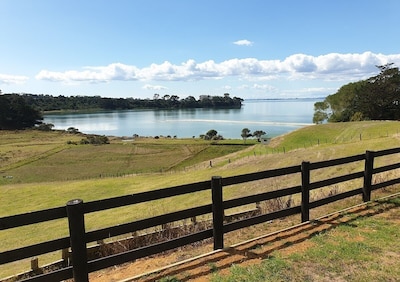 Greehock Farms 1980 How the property was started: We first laid eyes on this property, located in the Greenock area of Awhitu, while hiking from Kariotahi to the Manukau heads and then back around the bays during the 1979 holidays. The property was rather run down with an old shed and a bus near the beach house and next to the top house was a rubbish dump, but it still had something "special" about it. Jim and Phyllis decided to get up to ten like - minded families to have a share in what had become a dream. How did we get the name Greehock: As the prospective shareholders gathered together in 1980, it became clear that their new company would be requiring a name. Eventually an old lands and survey was produced, which showed that this particular area of land, was once known as Greenock, having been named after a village in Scotland. Being a very old map with poor faded print the name appeared to read as Greehock and after much discussion that name was agreed on as a suitable one for the company. Even once the mistake was eventually discovered, we decided to keep the original name of Greehock Farms Ltd and the name has remained for the past 40 years. In 2019, it was decided we would use the name Greenock, recognised as being part of the Awhitu area, a beautiful Scottish name pronounced ( ɡriːnək ) as our name for homeway/Bookabach holiday accommodation. Greenock in Scotland: Greenock is an industrial burgh (town) and port in Inverclyde council area, historic county of Renfrewshire, Scotland, on the southern shore of the Firth of Clyde west of Glasgow. Hemmed in by hills, the town is largely confined to the waterfront, along which it stretches for approximately 4 miles (6.5 km). The cramped lower waterside industrial areas contrast with the later 19th-century residential areas, which occupy the higher land.

Greenock Beach at Awhitu is a magical place for families! The top house was built in the 1950's and has fantastic views over the Manukau Harbour and the house near the beach was bought over from Onehunga on a barge. The area is known for its privacy and seclusion for anyone that wants time out with their family and friends. To build memories with your friends and the great family time with your children, grandchildren and great grandchildren at Greenock Beach. They all loved to kayak, go sprat fishing as the tide is just coming in up the creek. Safe anchorage for a boat. There is a tyre swing on the beach for the kids to swing on as they go crab hunting. A story from a share holder's Grandaughter Ceinwen when she was 10 years old --- My great Nana spent many long hours spear fishing up Brooks creek and around Dickey's bay. Late one night while fishing in Dickey's bay my Great Nana suddenly saw a sparkle near the water edge. My Great Nana had found a fairy pool that fairies bathe in at night and the water seeps from the bank into the fairy pool. When I first went to see the fairy pool, I did see something sparkle and when I put my fingers into the water it tingled right up my arm. It felt magical! Each time I go to Greenock, I walk or kayak to the fairy pool to make sure during the summer months, there is enough water for the fairies to bathe in. My great Nana showed my Grandma who also showed my mother, and now it is my turn to take care of the fairy pool.