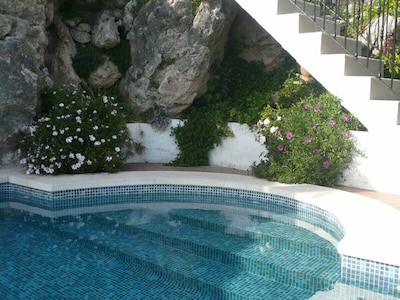 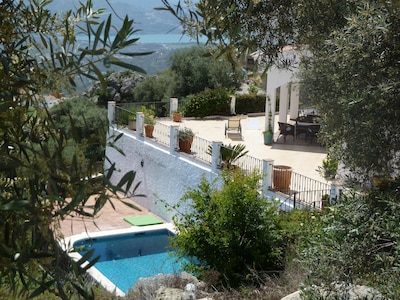 3 bedrooms, 3 bathrooms, enclosed swimmingpool and magnificent views to the sea

king
Can be made as a twin

king
Can be made as a twin

Bedroom 1 and 2 can be made as doubles or twins. Sofa bed in the living room - by request. Fullsize Travel Cot

Casa Beni is set between the Sierra Tejeda National Park and the famous white-washed village of Canillas de Aceituno, just 40 minutes north east of Malaga. The villa looks out over Lake Vinuela and down to the sea beyond - the Costa del Sol being a beautiful 20 minute drive away. Torre del Mar is the nearest seaside resort and here one can find some fine beach bars. A bit further along the coast are more intimate and private beaches and just outside Nerja, the famous Burriana beach. There are two golf courses within 25 minutes drive and an aquapark.

This is the perfect location to explore the rest of the Axarquia country side and the real Spain with all its beauty or nip down to the coast where the pace is a little faster. Marbella and Puerto Banus are within 1.5 hours and Malaga, which is full of culture and wonderful shops, a mere 40 minutes away. Nerja and its famous caves are definitely worth a visit - 25 minutes. The beautiful Alhambra Palace in Granada takes 1.5 hours and Sevilla a couple of hours.

I fell in love with Spain when I was 13 years old and my parents built a house out there. At 16 I was sent to school in Madrid so that I could learn Spanish. Years later I went out to Marbella to live and work moving back to England a few years later. But.....

Angela Orssich purchased this villa in 2006

I missed Spain, the Spaniards and the weather so much that I decided that I would build a house out there and chose the relatively unknown area of the Axarquia because it was far more Spanish and not so spoilt as the southern coast. I think I chose well!

What makes this villa unique

I think the main attraction, and why my guests keep rebooking, is the villas proximity to the village, making it possible to walk into the centre within 5 minutes and therefore eliminating the need to drive everywhere. The locals are all so very friendly and really want to spoil the tourists. Also the views from the terrace are absolutely stunning. What more can I say? Seeing is believing!