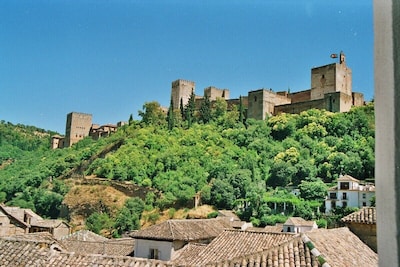 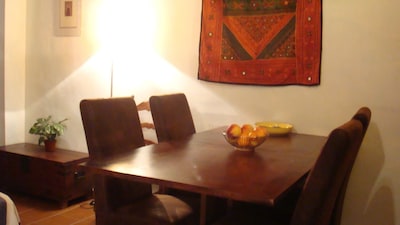 Beautiful townhouse in historic centre with views of the Alhambra

Views of the Alhambra from the terrace; the historic old town on your doorstep.

Decorated with touches of an antique style but maintaining contemporary levels of comfort, the master bedroom has an ample double bed (150cm x 190cm), bedside table with reading lamp, large wardrobe and a writing desk and chair near the window. The second bedroom has a similar sized bed, bedside table and lamp as well, with a writing desk also situated near the window. The rooms are decorated to match the period and style of the house which has been carefully and thoroughly restored to capture the original atmosphere.

Within easy walking distance of the Alhambra castle and the gardens of the Generalife, the house is located within the historic medieval center of the Albaicyn. Cathedrals and other sites of interest all within easy reach, as are restaurants, cafes and plazas. The renowned flamenco cave bars of Sacermonte can also be reached on foot, while tours associated with literary figures, such as Federico Garica Lorca, are also on the doorstep. The town of Granada serves as a base for the nearby ski fields of the Sierra Navada and lies about one hour from the coastal resort of Almunecar. Hiking in the Alpujarras or exploring the cave homes of Guadix is also a possibility in the nearby vicinity.

I work in education in the UK but grew up and trained originally in New Zealand. Later I completed my Masters in the UK. Working in a diverse range of countries, mainly in Asia, has given me the chance to teach in a wide range of systems but also to really enjoy the different cultures that produced them as well.

Maurice Halder purchased this house in 2000

My fascination with Spain came initially from literature. It was teaching the work of Federico Garcia Lorca and also the novel 'Leo Africanus' by Amin Maalouf, that finally attracted me to Granada however. I was at an international school in Hong Kong with over 90 different nationalities represented. Granada shared a similar heritage of bringing different cultures together and meeting creatively that I had to visit. Once there I wanted to be more than just an outside observer but part of it in some way. Our house looks across to the Alhambra Palace and also down the Sacromonte valley with its flamenco caves; it just seemed to sum up all that I had read of the place. Granada is also the city where Isabella commissioned Christopher Columbus on a voyage that lead to a European discovery of the Americas so in its own way Granada has offered much to the world we see today. This house similarly has so many facets; its blend of traditonal and modern design attarcted me immediately. While architecturally redesigned within the old walls, there was careful attention to retaining some of the original features. We did have to do some work to complete it before we were able to let it out but that merely gave us the opportunity to also be involved in its creation as well. What we have now it a one of our favourite escapes from the frantic pace of our everyday lives. It may be hard to believe but I was originally looking for a house in a village. Granada has over a million people but the Albaicyn even today functions as a self-contained rural village at its core and our house sits nestled on one of its hills with a glorious view of the Alhambra Palace across the valley.

It is located right in the midst of the historic Albacin with its cobbled lanes and unusual eateries. Being in the lower part of the Albaicin it is very easy to explore both the historic quarter and also the Realejo. Plaza Nueva, the hub of the tourist area, is a 5 minute walk from the house, as is the beautiful cobbled road that follows the meander of the Dauro River; there the many medieval stone bridges that span its width invite you to explore even more.