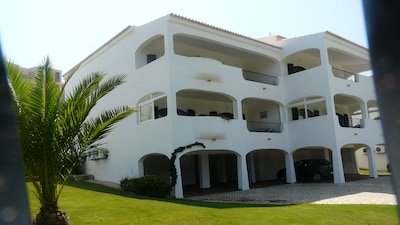 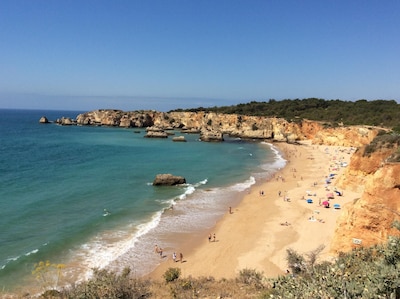 Description of sleeping capacity: Sleeps 4/5 (2 Bedrooms) Notes on bedrooms: 2 carpeted twin bedrooms (18m2 and 13m2) each having access through sliding patio doors (with integral mosquito screens) to either the front golf side terrace or the rear garden terrace. A good quality single fold away bed is also available.

The apartment is located close to what is widely considered as the most beautiful beaches and coastline of the Algarve. The nearest stunning sandy beach (called the Presidents beach since a the Portuguese President's Summer residence is located there), is only 10 minutes walk away and this links via a coastal or shoreline walk (at low tide) into the extensive Vau and Praia da Rocha beaches which eventually end at the Marina and breakwater which forms the entrance to the river Arade.

Faro airport is linked to the Western Algarve via a motorway (which extends up to Lisbon and also into the eastern Algarve and hence Spain/Gibraltar) and the apartment is approximately a 45 minute drive away. A taxi from the airport will cost approximately €60 each way. It is recommended that a car is hired (either at the airport or locally after arrival) especially if the area is to be properly explored and advice on this can be provided.

There is a good bus service available and a train service from Portimao (which extends from Lagos in the west along to the eastern Algarve close to Spain and also up to Lisbon). Car hire does of course give much more flexible access with both Alvor village and Portimao town being about 5 minutes drive away. These locations provide access to a wide range of shops and hypermarkets and Retail outlets. The picturesque sea front town of Lagos, the Monchique mountains, and the ancient town of Silves involve a 20 minute drive.

Alvor is an atmospheric and much loved fishing village located on an extensive estuary which provides a fantastic vista and includes a wild life sanctuary. This aspect can be viewed from a long waterside promenade. The region also has an extensive sandy beach. A maze of cobbled and narrow streets contain houses which are largely occupied by local inhabitants together with many restaurants some of whom barbecue fish on the pavements. In the surrounding area from the apartment numerous other restaurants can be visited to suit all tastes and budgets. For example Portimao is principally a Portuguese working town and it is an easy matter to eat where the locals do at much less cost.

Details are provided in the apartment (and on the disc supplied by post) of restaurants and the many leisure activities in the area which are kept updated. It is also possible to book many organised excursions (Seville, Lisbon, Gibraltar etc) from travel shops in Alvor.

Metered Taxis are easy to acquire and fares are reasonable (€5 from the apartment into Alvor for example) and the Golf Club reception, just a very short walk away, will call one if required.

Cash Machines are readily available outsibe banks and inside the majority of both small and large supermarkets. English is widely spoken in shops, bars and restaurants in the area. Contact for free disc of pictures of both the area and the apartment.

We are a retired couple living in Cardiff and we have equipped our apartment in Portugal from new to use as a second home following the sale of our Dutch Barge on the French Canals. Our eldest son and his wife are our neighbours in a block of 4 such apartments. We decided to choose Portugal mainly because of the friendly nature of the people, the access to rural locations, beautiful scenery and beaches and the unhurried lifestyle which it offers plus of course the climate! We have made many friends in the area and when we visit we are transported into a totally different lifestyle with a chance to enjoy local food (especially fish from the local market) and Portuguese wine. In particular we often use the apartment as a base to explore other areas of Portugal.

This region of the Western Algarve is regarded as a hidden gem. Alvor remains as a peaceful working fishing village with a daily held fish market supplied from boats based in the estuary and some of the the most beautiful and extensive sandy beaches in the Algarve are located here. We decided to purchase this apartment as it is situated on a quiet no through road which is adjacent to the 10th green of Alto Golf Course and also because it is only a 10 minute walk from the nearest undeveloped beach. The location also provides ready access to all the local ammenities such as restaurants, shops and activity attractions. The area with its beautiful coastline provides an ideal environment for walking and the Monchique Mountains (as viewed from the front terrace) are only a 30 min drive away.

What makes this apartment unique

When booking (or by request) guests are sent a disc of information and pictures. There is a shared pool (for 4 blocks of 4 apartments) in the rear gardens with a children's section. Of particular advantage (especially in hot weather) are the front and rear terraces of the apartment which provide shade and keep the indoor areas cool. A key is provided to the lock up storage area on the ground floor in which toys are kept for children in addition to pool inflatables and beach items. Guests who wish to play golf are offered a generous discount at the Alto Golf course and also on other Pestana run courses in the area. There is a Health Club with all usual facilities located approx 1km away. The apartment has a Rental Safety Certificate issued by the Portuguese authorities (gas free).