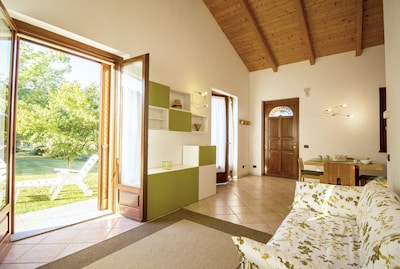 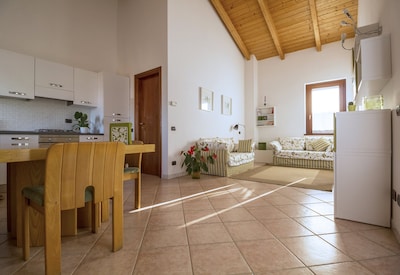 Panoramic apartment in villa with garden

The Canavese, with Ivrea, its main center, is close to other places of interest such as Turin and the Aosta Valley, Milan and Genoa. Characterized by one of the most well-known morainic amphitheater in Europe, formed during the great glaciations, the territory offers an almost uncontaminated nature, lakes and rolling hills, the Gran Paradiso National Park, quality food and wine, castles, ancient religious buildings, festivals and cultural events, possibility to practice numerous outdoor sports. Ivrea, is considered the "capital of the Canavese", is a city that develops along its Dora river, famous for its historic Carnival, a unique event that fills the city with colors and scents every year with the spectacular Battle of Oranges, moment of great involvement and strong emotion, re-enactment of the popular rebellion against tyranny. Ivrea was also the protagonist, thanks to the production and technological development for the history of Olivetti, not only a factory but also a center for innovation, culture and promotion of the territory. Just stroll through Ivrea to discover "live" what the Olivetti-Ivrea combination was, see the buildings now included in the UNESCO World Heritage Site "Ivrea Industrial City of the 20th Century".

A tour in the surroundings

Suggestive itineraries lead to discover picturesque lakes, such as the five lakes of Ivrea and those of Candia and Viverone, the Serra d'Ivrea, with its characteristic morainic Amphitheater shaped by ancient glaciers, up to the peaks of the Gran Paradiso National Park , one of the most important protected areas in Europe, a hiker's paradise. Sport contributes to livening up the life of the territory with national and international competitions of the various disciplines, offering a unique scenario for practicing numerous outdoor sports: trekking and nature walks, on foot, by mountain bike or on horseback; sport climbing on equipped rock gyms and, in winter, on ice; windsurfing and sailing in the plains and high altitude lakes; canoeing, rowing and rafting; horse riding; golf; paragliding; Alpine and Nordic skiing; excursions with snowshoes. We point out the presence of the Damanhur Community and the Circuit of the Castles which characterizes the territory; these ancient manors represent a visit route with an ancient flavor; among the best known, there are the Masino Castle, the Ivrea Castle and the Ducal Castle of Aglié, part of the Royal Residences of Piedmont (UNESCO World Heritage Site), as well as the Reggia di Venaria, in the immediate vicinity. in particular we recommend the Castello di Parella, a few minutes on foot, recently reopened after being masterfully restored. Some important events nearby are the "Medieval Fairs" of Pavone Canavese, the "Ceramic Exhibition" of Castellamonte, with the display of the well-known ceramic stoves, the "Grape Festivals" of Caluso and Carema, the "Festival of Cabbage Verza ”of Montalto Dora. There is no shortage of regular events and seasons of theater and classical music, as well as well-known festivals such as Open Jazz and Tavagnasco Rock. Among the best known wines are the Carema, made from Nebbiolo grapes, and the Erbaluce di Caluso, an indigenous white grape variety.

Ask a question
Member Since 2018