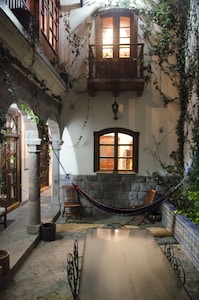 3 blocks from Plaza Indepedencia in heart of Spanish Colonial Quito.

Originally from Louisiana, the name of the house is dedicated to the Spanish Empires last govenero...Baron de Carondelet ......President of the Real Audencia in Quito immediately after his service as Governor of Spanish Louiisana is 1805

It was the smallest we could find to renovate...5,000 square feet. to Plaza blocks. Bohemian nieghborhood of San Marcos which is reminiscent of Europe.

What makes this Bed & breakfast unique

We restored the house intalling modern conveniences but maintaining the old world charm of a typical late Spanish Colonial or early Republican home.