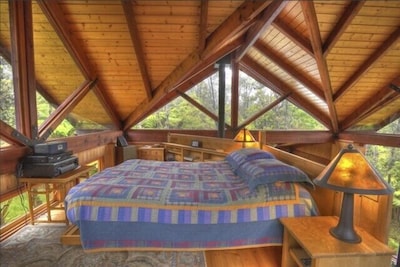 The State of Hawaii requires any person traveling to the state on or before October 1 to self-quarantine for 14 days.Find out more

Our loft is centered around one queen-size bed. Below in the main room, is a double-sized futon. We also have two fold-away foam futons that can be laid out on the living room floor or on the lanai in nice weather. Sheets are washed on the "hot" setting between reservations.

Kipuka Cottage is in a native Hawaiian rainforest just a 7-minute drive from amazing Hawai'i Volcanoes National Park, where you can see the steaming glowing summit crater of Kilauea volcano. There are miles of hiking trails through lush forest and rocky volcanic landscapes. There are ancient historic sites, a volcano museum, art galleries, good restaurants, a wonderful community farmers market (don't miss the used-book store) -- and even a small bowling alley! A black-sand beach where turtles sunbathe is 30-minute drive in one direction. And 30 minutes in the other direction is the fun, funky, historic town of Hilo.

We are your hosts, husband and wife Bill Harby and Marie-France Robert. Bill is an American freelance travel writer, editor and photographer who has lived in Hawai‘i for 31 years. He is happy to answer your questions about Hawai‘i. Marie-France is Swiss-Canadian, and works as the senior health, safety, and environment specialist for a multi-national company. We met in 1975 in Neuchatel, Switzerland, Marie-France’s hometown. After two memorable days together, we lost track of each other for 32 years. Then, after several marvelous miracles, we married in 2009, and now call both Volcano and Montmollin, Switzerland home.

Bill designed and helped build this lovely (if he does say so himself) cottage because he fell in love with the Volcano area when he first visited it as a child. Years later, while living in Honolulu, he learned that this beautiful patch of secluded forest near Volcano village was available, so he bought it and began drawing plans for his dream home. Then he convinced his good friend Terence, a master carpenter to build it. Kipuka Cottage is the result. Bill lived there full-time for 7 years before getting married. He and his wife Marie-France now divide their time between Volcano and Switzerland. One day they will retire at Kipuka, but for now they are happy to share it with people who love custom architecture and interior design in a secluded dramatic natural setting.

Custom architecture and interior design. Secluded, but Volcano village and Hawai'i Volcanoes National Park are just minutes up the road.