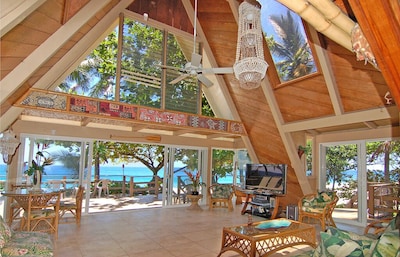 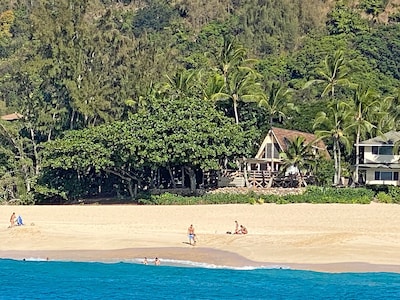 HI, I'M MICHEL RUBINI. the very happy owner of The Sunset Beach House. I am a musician by trade, and I have been playing piano since I was 3 years old. I came to Hawaii with my father for the first time when I was 18 and have had a mad love affair with the islands ever since. I told my father at the time, 'Dad, one day I am going to live here', and he answered with a little chuckle, 'Yes son, of course you will'. He didn't believe me at the time and thought it was just a young man's fantasy so he humored me because he was a great dad, but several years later when I was a little more grown up, I came back and bought my wonderful home on Sunset Beach and I have been coming to the islands ever since. To be able to sit on my deck and view the beach and ocean, listen to the sound of the birds and waves is a wonderfully relaxing experience that I look forward to every morning that I am here. I am very happy to be able to share my little piece of Heaven with you. I hope you enjoy it as much as I do. Aloha, Michel PS: My autobiography entitled "LIFE IN THE KEY OF RUBINI - A Hollywood Child Prodigy and His Wild Adventures in Crime, Music, Sex, Sinatra and Wonder Woman" is now out and for sale in both Kindle and Softcover editions, so look it up and read a little more and get to know me a lot better!!

WHEN I WAS first looking for a home to buy in Hawaii I was not familiar with the islands, so I decided to travel to all of them to learn about them and to see what each of them offered. I discovered after visiting the outer islands that Oahu was the very best of all of them. The best part of course was that I found the best beach in all of the islands, Sunset Beach, which was the best kept secret in all the islands. Nobody knew it existed there on the North Shore except for the local islanders, and they were not telling anybody. I was taken there by a very friendly local, and when I saw the beautiful, white pearly sand beach in front of my house and the exotic, secluded location, and also being only 1 mile from the biggest waterfall on the island, Waimea Falls, I fell in love immediately.

MY HOME HAS the unique advantage of being the very last home on a frontage road, and because of that I have only one neighboring house on my left side, which is hidden from view by a 30' hedge of island vegetation. On the right side of my home I have my private volleyball and badminton court, and then there is just state land for about 300 yards before the start of the next frontage road. For that reason, my home has a great feeling of privacy and tranquility with unsurpassed views of the beach and ocean. I never feel 'boxed in' like the other beach houses. ********************* I Found Out that I could be just as secluded as I wanted on the most beautiful beach in all of Hawaii, or I could enjoy a bounty of cultural and ethnic delights not found anywhere else in the islands. It was just up to me to decide what I would do on any given day, be a sun worshiper on the beach, or join in the party that is always going on around the rest of the island. *********** The Ancient Hawaiians considered this location to be a spiritual spot on the island and held many ceremonies here on the beach, and also carved hieroglyphics into the beach rocks (which you can see at certain times of the year when the tide is low). It is considered to be a location of considerable archaeological significance and is also believed to be a very spiritual place by the Hawaiians. *********************** Oahu Is as beautiful and varied as any of the other islands, but also has the advantage of being able to go to wonderful restaurants, movies, nightclubs and concerts. The main history of Hawaii plays out on Oahu, and the Bishop Museum, the USS Arizona Memorial, the 'Iolani Palace, which is the only true royal palace in the United States and the last official residence of the kings and queens who ruled Hawaii, King Kalakaua and Queen Kapiolani, are all must sees during your visit here to Oahu. ------------