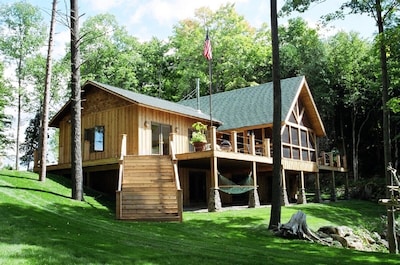 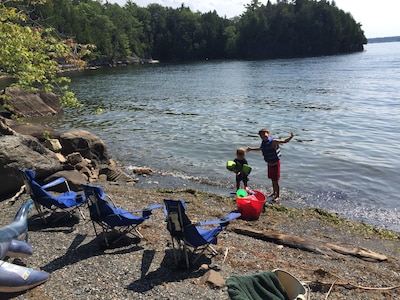 Hosted by Rachel or John

Hosted by Rachel or John

About Rachel or John

Brothers Brian, Steve, and John(ny) have owned the house aka RDC together with their families since 2003 when they inherited the land as part of a 100 year dissolution of the greater family trust that was the legacy of Great Granny Tot. Braeloch was purchased by George Dick Finlay on or around the turn of the 20th century. He was an immigrant from Glasgow Scotland and bought 300 acres on the north side of Mallets Bay. At that time the railroad barons and NYC socialites used to summer in Burlington and many built massive estates that persist to this day (albeit in alternate forms, eg. Shelburne Farms). Well, ole George sought to do the same to Colchester as Lila Vanderbilt did in Shelburne but maybe with not quite the same financial support. Nevertheless he left Braeloch proper to his three surviving daughters who divided it, one of whom was Granny Tot. Tot's inheritance remained in tact until when in 2003 Tots son (featured above) and beloved wife decided it was time to divide the property amongst their four children. The eldest was Lewis Stephen III (aka Steve) and he was the patriarch of the "Red doodlebug" clan, where as his brothers and sister led the Green, Yellow and Blue doodlebug branches of the family. Steve had three sons, each of whom were raised in Los Angeles CA and though they had spent many weeks over the years at Braeloch it was not a constant in their young lives. Yet the magical allure of Braeloch is hard to forget and even as they lived far away, when they ultimately inherited the "Pebble Beach" lot and Tots camp (#133190) all decided to double down and reconnect to Braeloch. In 2005, the Red doodlebug brothers three decided to build a "small little cottage" maybe of 1,500 SF or so "just enough to enjoy the lake and breezes...nothing too much" they said. A year later "RDC" ("Red Doodlebug Cottage") was built and though the house was anything but "too much" the name stuck as an ironic reminder to all of the house's humble intentions

Why Rachel or John chose Colchester

Because you want to unplug in style! Yes we have cable and yes we have wifi and great cell service but families come to Braeloch to take a break from technology and city life. Expose your kids to the beauty of untouched forests and natural privacy; the way life was, not just when you were a kid, but when your ancestors were. RDC is especially perfect for two families who want a house big enough to share. Three master bedrooms, two central entertainment rooms, 60 feet of deck including a huge screen porch and, of course, virgin lakefront. Braeloch itself is totally safe from modern worries; free from any traffic on a closed road and completely private (yet it does have natural dangers from lake and rock cliffs). The house is surrounded by virgin forest with nary a house in sight; a mile from any road of consequence and over the hill from the "meadow" where few neighbors play tennis or take walks.

Natural beauty, far away from everything yet close enough to enjoy one of the great small college cities around. The best of enjoying the old without having to sacrifice the comforts of modern convenience [wink!]. Said another way, it's perfect for you and your family who will love it for what it is yet still technologically updated and stately enough for that uncle or aunt who won't go anywhere without being able to stream constantly.