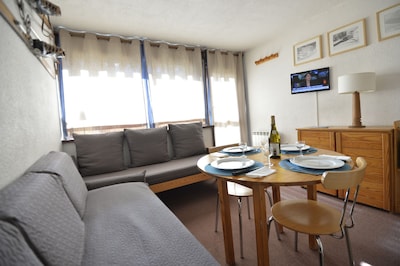 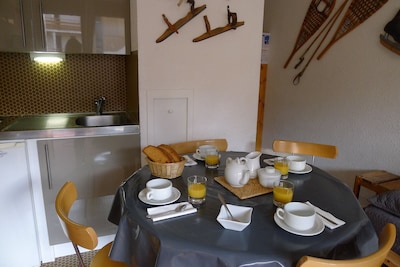 4 beds in total. Bed linen is not provided. (possibility to rent the cleaning of the Adret by internet) see their website. In the living room: a bed * 2 places. For the night, * the two beds are close together which becomes a large double bed. It is equipped with a large duvet two persons 220x200cm). A small room cabin "separated from the living and closed, with a small window (two beds 80 which are superimposed). They are each equipped with a duvet one person. Two drawers underneath for storage, a bedside table and two bookshelves. The beds are equipped with pillows, bolsters and duvets. For the bed 2 people, it is necessary: A large duvet cover of 220x200cm, two pillowcases 65X65 cm and two sheets cover of one person since they are two twin beds. For bunk beds it is necessary: Two duvet covers one person, two pillowcases and two sheets cover one person.

Moutiers: is 27 km from Les Menuires.

Albertville: is 50 km away

Center of the Croisette: 300 m

The TGV station if located in Moutiers, then connection by Altibues coach to the station's bus station. It is located around 800 m on foot from the residence or 5 minutes by free shuttle bus.(stop at Fontanettes rue Haute).

The residence 'LES ASTERS C4' is located rue Haute at the entrance to the FONTANETTES district, approximately 300m between the center of La Croisette and the Reberty district.

Everything is done on foot, no need for a car, otherwise there are free shuttles and buses throughout the resort. There is a stop nearby in the bend. (small wooden chalet).

Free treadmill for beginners and a toboggan run for children in the center of the Croisette.

An outdoor swimming pool in the Bruyères district.

Cross-country SKIING on 28 km of slopes in the Menuires valley to Saint Martin de Belleville. You can return by the free bus shuttle.

You put your skis on at the bottom of the residence or in front (for good skiers); and from there you take the path to join the track which takes you to the Doron chairlifts, the LA MASSE cable cars and the Reberty chairlift.

Several vending machines for ski passes are located downstairs at La Masse to buy your PASS during the opening hours of the slopes and at the La Croisette center outdoors. Picnic rest room and WC.

Cable cars go up to the LA CROISETTE center.

For people who do not ski, a pleasant walk is to be done along the cross-country ski trail all around the lake and the Le Doron stream. Similarly, go on foot along the LE DORON stream and through the villages to Saint Martin de Belleville and return by the shuttle bus to Les Menuires. Superb landscapes! Excellent Savoyard fondue at Le Montagnard restaurant in Saint Martin de Belleville.

Still other activities. Two cinemas, 2 nightclubs, 2 ski schools, one at La Croisette the other at Reberty.

Shopping mall in the center of the Croisette.

Ask a question
Member Since 2005
Annie Duclos is a Premier Host·The owner or manager of this property consistently provides great experiences for their guests.