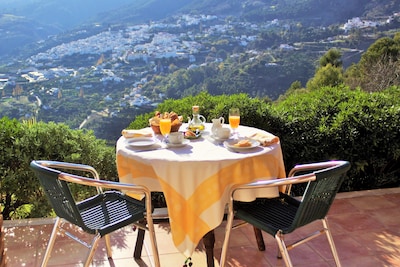 The villa is a charming place where to create memories with your loved ones.

All bedrooms which are uniquely decorated both with antique and modern pieces have all the accommodations required for a comfortable stay. The rooms are en suite and fully furnished with night stands and a desk or table with chair, rocker or armchair. A full length mirror and plenty of hangers are to be found in the ample cupboard. All of Nuevespigas rooms have beautiful views onto the Guadalhorce Valley and the village of Casarabonela which can be seen while standing on your own terrace or balcony.

Nuevespigas is located in Casarabonela, one of the “White Villages” of Andalucia, just 42km from Málaga, capital of the Costa del Sol and home to the new Picasso museum. The area surrounding Casarabonela is known as ' Sierra de las Nieves' named Biosphere Reserve by Unesco.

Nuevespigas is close to Marbella, Ronda, Malaga where you may visit La Alcazaba- Arabic castle-. the Cathedral, the Roman ruins. Pompidou, Thyssen and Rusian Museums, enjoy the Sea Port as well as to have the tipical "pescaditos fritos" freid fish.

Also Nuevespigas is close to the so call El Caminito del Rey. El Caminito del Rey is a step built on the walls of the Gaitanes gorge, between the municipalities of Ardales, Álora and Antequera, in the province of Málaga, autonomous community of Andalusia, Spain. It is a pedestrian walkway of more than 3 kilometers, attached to the rock inside a canyon, with sections of a width of only 1 meter, hanging up to 105 meters above the river, on almost vertical walls.

You may also go to Antequera and visit the well-losknown " Los Dolmenes", Prehistoric archaeological site, who was declare World Heritage recently.

Nuevespigas is easily reached from Malaga via the A-357 direction Cartama. After about twenty minutes on this road you will find a sign on your right indicating Casarabonela, Alozaina on the A-354. Turn left onto this road and after 10 to 15 minutes turn right towards Casarabonela,A-7275, before actually going into the village and after the Peugeot Garage you will find on your right the first of six signs towards Nuevespigas.They will lead you to a dirt road and to 2 "steep climbs" which can be easily salvage by turning of the air conditioning, putting the car in "first gear" and stepping on the gas.Whether you are coming from the Malaga Airport or Marbella via the N-340 the prior roads are the same to reach La Era. From Sevilla or Granada the approach should be from the A-92 onto the A-384 to Campillos then the A-357 direction Malaga up to A-354

Family owned villa, once created as a B&B now managed by parents and his sons Andy and Juan