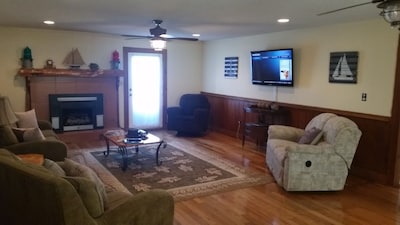 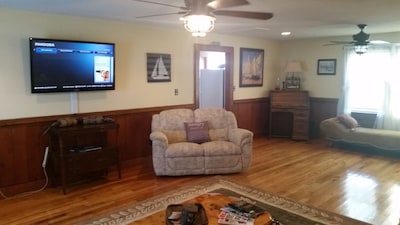 The large master has a queen and a king bed.

This property sit on the grounds of The Coinjock Marina. Although quiet there is usually always something to see in the way of yachts, boats etc. Also within walking distance of the famous Coinjock Marina Restaurant which features great food as well as live entertainment on weekends. Boating is very good nearby with areas to ski,fish cruise or just find a secluded sandbar and dockage is included at certain times of the year. World class golf courses very near by.Only a short drive to to the beautiful Outer Banks and resort area and close to the new H2obx waterpark.

Located conveniently on the Intracoastal Waterway at Mile Marker 50, the Coinjock Marina has been a longtime favorite for transient yachtsmen traveling north and south along the waterway.

With all the amenities you would expect from a world class marina the staff of Coinjock Marina demonstrates a willingness to accommodate your every need so that we make your stay a memorable one.

With newly refurbished docks, an easy approach with alongside dockage, and a highly acclaimed dockside restaurant, you will soon see why thousands of visitors say that Coinjock Marina is truly one of their favorite stops.

Whether you’re driving, boating, or perhaps even piloting your own helicopter, Coinjock Marina will take care of you and treat you like family.

Coinjock is an unincorporated community and census-designated place (CDP) in Currituck County, North Carolina, United States. As of the 2010 census it had a population of 335. It is located on U.S. Route 158 between Barco and Grandy, about 20 miles (32 km) south of the Virginia state line, and is at mile marker 50 on the Intracoastal Waterway. Church's Island to the east of Coinjock in the Currituck Sound has a village called Waterlily, which uses the postal address of Coinjock as well. The island's name is due to a decayed church that was once a landmark of the tiny community. Coinjock is bordered by Currituck Sound to the east; the North River lies to the west.

Residents suggest the name Coinjock is of Native American origin referring to mulberries, which might have been prevalent in the area many years ago. There are no mulberry trees there now.

The name has also been spelled "Coenjock", "Cowenjock", or "Cornjack", and sometimes as two words with the second beginning with a capital J. Bishop Thomas Coke visited Coenjock, as he called it, and preached to a small congregation in its chapel on March 19, 1785.

The Coinjock Colored School was listed on the National Register of Historic Places in 2013.

We own and operate the Coinjock Marina and restaurant as well as manage the properties onsite. We love to share our homes with other travelers as that is how we travel ourselves!

Gia purchased this cottage in 2001