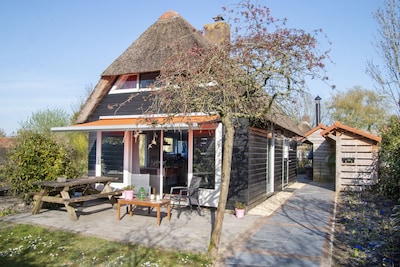 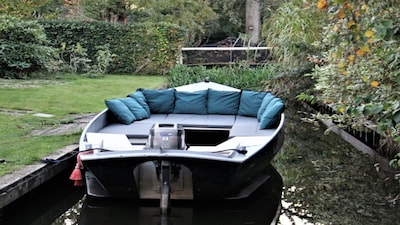 Beautiful Holiday Home with boat (included in price; from April until October)

Unique: This property is not located on a holiday park, but privately owned.

Ask a question
Member Since 2018

Leendert Maat, 43 years old. Living in Amsterdam. Grown up in the neighbourhood of Giethoorn. When the opportunity was there to purchase this house in 2015, we did not hesitate one moment. The house is a perfect hide away from busy Amsterdam once in a while. We would like to give you the opportunity to experience this yourself by renting out our house when it is available. The house is owned by 6 childhood friends : Klaas, Alex, Siean, Herman-Pieter, Bastiaan and Leendert.

Leendert Maat purchased this House in 2015

Location, location, location! A lot of holiday houses are located on a holiday park in Giethoorn. What makes this house unique is that it is privately owned and not located on a holiday park, but in the middle of the village of Giethoorn. You will be living in between the local residents. The house is located on the waterfront, but not right at the busy canal. You will experience lots of privacy around the house. Take the free boat to explore Giethoorn and its surroundings. For example: De Wieden or Weerribben. De Weerribben is a 35 km² nature reserve in the municipality of Steenwijkerland in the northwest of the Dutch province of Overijssel. It forms part of the Weerribben-Wieden National Park and is largely in the hands of Staatsbosbeheer. The De Weerribben National Park was originally established in 1992. On 17 January 2007 (finally in January 2009) the park was expanded to include the De Wieden area that is similar in nature to the south and is largely in the hands of Natuurmonumenten. Together it forms the Weerribben-Wieden National Park, which is almost 100 km² in size. Together they form one of the most important wetlands in Europe.

- Lots of privacy - New mattresses of superior quality. You will sleep like a rose. - Use of Motor Boat free of charge (no license needed) - Inside and outside fireplace. Wood is free of charge - Two bicycles for you to use - Fast and stable Wifi-internet in and around the house - Several terraces around the house to enjoy outside living (once covered and with fireplace) - Netflix with international films and series