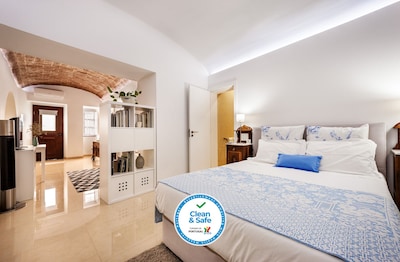 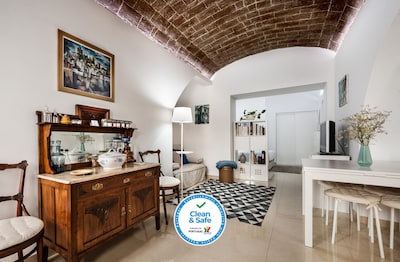 The Ebora Home in the historic center of Évora

T1 in the historical center, 250 m from the Giraldo Square. For families up to 4 persons

The Historic Center of Évora was classified as a World Heritage Site by UNESCO in 1986. This classification is delimited by the wall "Vauban" built in the seventeenth century and inside it is the "museum-city", which contains 20 centuries of history of the peoples and civilizations that lived in Évora. There are real estate and specific areas of the city that are classified as patrimonial value to protect, such as the facade of our house, included in the list of properties of historical and cultural interest to preserve. Ebora Home is located at Rua dos Mercadores, in a central area of ​​the ancient medieval Jewry of the city of Évora. Between the 14th and 16th centuries, according to historians, this community had a community of about 8,000 people and a series of services such as school, hospital, ritual baths, two synagogues, reading and interpreting bible sites and gafaria. Rua dos Mercadores is already mentioned in the first quarter of the fifteenth century as the Right Street of Merchants (to distinguish it from two other streets also known as Merchants). It was also known as Rua dos Ferreiros or Rua da Ferraria, which reveals the predominant type of economic activity carried out there.

The house is family heirloom. It was acquired by my grandfather Joaquim, in 1914, for income. On the first floor two families lived and in the ground floor, where there was always trade and craft workshops, there were at the time 3 small shops: frutaria, grocery store and shoemaker. The building's architectural restoration project, started in 2014, has created two modern apartments in the ground floor, respecting, nevertheless, the structural design and leaving in sight some constructive techniques and traditional materials, namely the vaulted ceilings, crib, set back in perfect arches, the donkey brick, the stonework, etc.

The Ebora Home apartment is in the area of ​​the old fruit sale, having undergone the necessary functional adaptations for housing. The small well that existed in the store, and in whose diameter only a cauldron fit, was plugged, for safety reasons,

Inside the apartment we want to combine the old with the modern in search of a good solution of comfort and functionality. We restored some family furniture, which we completed with: a good sommier, placed in the bedroom and a sofa bed in the room, both 1. 40 m wide; a flap table extendable up to 1.80 m; a shelf where we organized some bibliography about the history of Évora, we put a tv and wi-fi. The bathroom, with bathtub, has a heated towel rail, hair dryer and all skin care products. In the kichnet there is: fridge, water heater, dishwasher, ceramic glass plate, microwave, toaster, digital scale, electric kettle, magic wand and citrus juicer, plus a kitchen train, dishes, cups, tea service , coffee and cutlery for 6 people, including other basic utensils.

At the time of check-in we leave food for guests to have breakfast at home, namely, mineral water with PH of 9.5, half-fat milk, individual doses of butter, jam, coffee, teas of different types, nuts, figs from the Algarve and fresh, organic fruit. To aid in some quick meal there is: salt, pepper, olive oil, rice and whole spaghetti, dehydrated tomatoes and mushrooms and parsley and fresh chives.

The textiles, such as sheets and towels, are pure cotton, there are summer and winter duvets and extra blankets, although the house has an excellent natural climate, given the exceptional thickness of its walls, which allows to keep it cool in the summer and warm in the winter.

Also the decorative details are part of the soul of the house and so we put several pieces of local creation that help to humanize the space and contextualize it in the local culture.