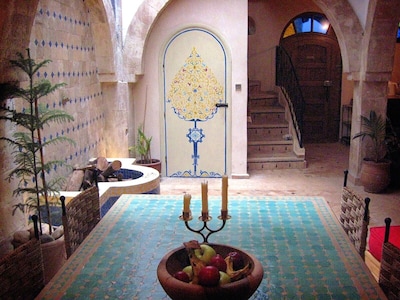 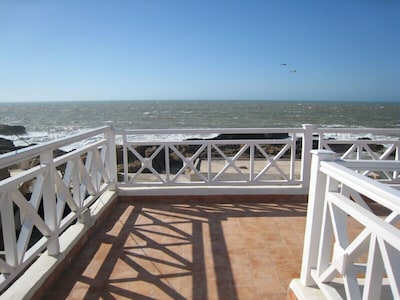 Essaouira is a small historic fishing port on the Atlantic coast of Morocco, renowned for its laid-back and friendly atmosphere, souks stuffed full of local art and craftwork as well as local produce, its long sandy beach and its well-preserved old walled medina, named by UNESCO as a World Heritage Site in 2001.

The weather is temperate and warm year-round and the bracing sea winds make it an attractive spot for windsurfing. The long sandy beach is also home to daily local football and basket ball games and at the south end are the ruins of Borj el-Berod, mythically said to have been the inspiration for Jimi Hendrix's 'Castles made of sand'. The old medina ramparts are a great spot to watch the waves crashing onto the rocks as the sun goes down over the 'Ile de Mogador', a group of tiny islands which offer sanctuary to Eleanora's falcons.

Inside the medina, the narrow streets (from which cars are banned), are filled with bustling fish, spice, vegetable and pottery markets, art galleries exhibiting work of local artists, souks selling carpets, ironwork and local thuya wood craftware and children playing. Stop and stare in one of the local cafes or patisseries, selling strong coffee, Moroccan mint tea and freshly squeezed orange juice. Evenings are happily wiled away in one of the numerous restaurants, steeped in atmosphere and warmth, which serve traditional Moroccan fare: tagines, couscous and Moroccan and French wine.

Within Essaouira, you won’t need a car (the medina is pedestrianised). You might want to take short trips around Essaouira, but taxis are cheap and easily organised through Fouad (our caretaker). It is also easy to hire a car by the day in Essaouira if you would like to explore more independently.

Hosted by Johan and Clare

Ask a question
Member Since 2007

About Johan and Clare

We're a family of five with three young children. We bought the riad in 2006. We love Essaouira and we go there several times a year. The rest of the time we rent out the house. It's great to talk to our guests about Essaouira and Morocco, and it's really nice to see so many guests wanting to come back to our house.

Johan and Clare purchased this house in 2006