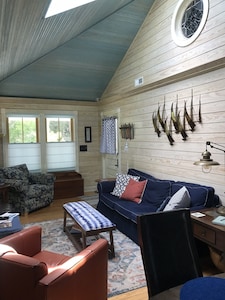 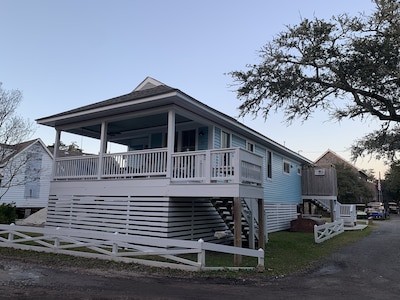 Our first trip to Ocracoke was the year we met in 1981. We fell in love with each other and the island, never thinking we would someday own a home with the dream of someday living there. Currently working in Raleigh with 2 kids to put through college, those dreams are in the future. So for now we look for folks who also share an appreciation of Ocracoke and would enjoy staying in an island home on a sandy lane that captures times past. Our hope is that you will feel part of this community.

Kathy Phillips purchased this House in 2016

We bought the home next door, Elsie’s House, in 2011. Built in 1888 it had a deep history and connection to the people who live on the island. The house originally belonged to Myron’s parents, Simon and Sarah Garrish, who had 57 Howard built for him in the 1920s. When it came up for sale, we just couldn’t pass up the opportunity to bring this house back to life.

Enjoy the enlarged front porch and wave to passers by. Look up at the original ceiling just outside the front door and you will see a square cut in the boards. This is the evidence of an escape plan by two terrified occupants of the house in the devastating 1944 Great Atlantic Hurricane who took to the attic to escape the rising waters. We decided to raise the house rather than put a hinge and a handle on the old hatch!