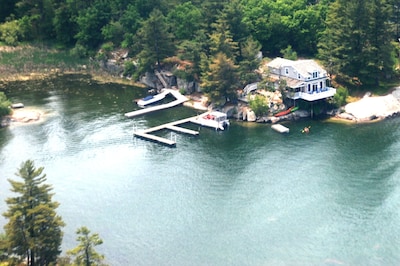 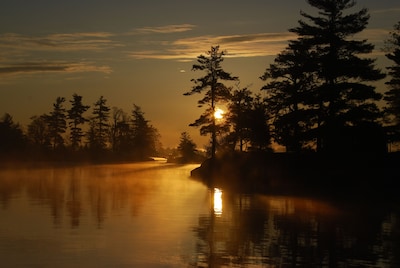 Master Bedroom has a view of the US & Canadian Shipping channel. You also have a great view of Goose Bay and private cove. The master bedroom is connected to private bath with large walk in shower, 6 foot granite counter top sink Master Bedroom also includes a desk that over over looks the St. Lawrence Seaway. You can enjoy the sunrise from the master bedroom and watch the ships go by. Pull out couch in living room.

Enjoy the 1000 Islands Region and The St. Lawrence River.

Relax in comfort and style with a first floor that includes an open great room that overlooks the St. Lawrence River. After a day on the water, prepare your catch of the day in a beautifully appointed kitchen that includes hickory cabinets and all the modern kitchen appliances you’ll need to prepare a memorable meal. A full dinning room with views of Goose Bay is the perfect spot to enjoy dinner with family and friends. Afterwards, plan the next days’ adventure on one of the two patios or in the comfort of the living room. A half bath rounds out the first floor amenities. When it’s time to call it a night, there’s plenty of space for rest and privacy. The second floor of the cottage has 4 bedrooms and two full baths. The master bedroom has a spectacular view of Goose Bay, the main shipping channel, and the very private cove. But don’t worry if you didn’t get the master bedroom, all bedrooms have a view of the water.

I grew up in Baldwinsville NY and graduated from Rochester Institute of Technology in Electrical Engineering. Over the past 25 years, I have enjoyed supporting clients in providing technical hardware and software solution to assist my customers to design products in the Computer, Medical, Miltary and many other industries. My experience and passion to solve technical issues while exceeding my customer expectations provided me the ability to upgrade, repair and manage Pine Cove Cottage and Bald Eagle Cottage over the past 10 years. My wife and I decided to purchase a second home in the 1000 Islands as another project since we close to putting the finishing touches on Pine Cove Cottage.

My Wife and I have been looking for a vacation home for 20 years in the Islands. We found this old fishing cottage that had lots of potential with a great location with excellent views in 2008. The cottage has been a huge project but the end result has been well worth the effort.

The cottage has excellent views of the surrounding Islands, sunrise, sunsets & shipping channel. The location provides private setting that is very close to the town of Alexandria Bay, NY. The private cove offers protection from rough water for our large dock and great swimming.