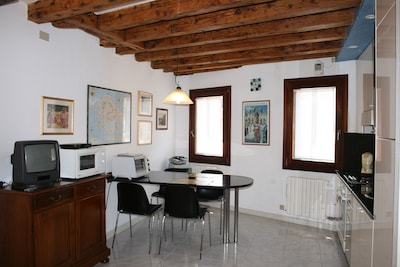 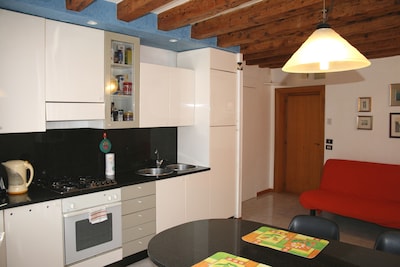 Apartment in the Historic centre of Venice, Italy

Check in after: Flexible
Check out before: 10:30 am

First-time visitors may be surprised that from Piazzale Roma onwards, all journeys are either on foot or by water vehicles: no cars, nor cross-roads or traffic lights!

Venice is a labyrinth of foundations, narrow streets, squares, paved roads, channels, bridges and old channels that are now streets; it is not a large city, and it is quite possible to walk from one end to the other in an hour.

In fact, one of the many joys of visiting Venice is simply walking through its alleyways. Waterways are as important in its life as the network of its streets: the canals filled with shallow water about 2- 4 meters deep, used by water buses, water taxis, gondolas and traghetti (gondolas with 2 oars used to cross the river), are spanned by bridges that connects both banks, often flanked by long narrow streets- the fondamenta- that run close to the foundation of the houses.

Observing a map of Venice, you can easily notice that its shape is a fish crossed by the Grand Canal which divides the city in two parts connected by 3 main Bridges: the Rialto bridge made of stone, the Accademia bridge in wood, and the Railway bridge in stone.

For now just wander through the site and dream about actually being in Venice...

The luxuriant Venice, in days of silk and spices trade with Byzantium, is proudly portrayed by Vittore Carpaccio's paintings, which refined views of the city show the splendour of its architecture and life in the lagoon depicted as if all the tones of the spices (from ginger to cinnamon) coloured the lively alleys intoxicated by the bustle of foreign merchants, the swaying gondolas in the Saint Mark's pool, the myriad of bridges spanned at random between countless islands and even the centre of Venetian trades - Rialto Market.

The power of Venice was not exclusively based on Murano's polychrome blown glasses, on or precious silks, however was based on an innate ability to buy and transport refined goods from far and exotic countryside; also its might of the arms was relevant. European economy was so dependent on Venice's Market that it became into the habit of circulating small coupons with average prices of the spices sold at Venice Rialto Market...

Venice enjoyed a uniquely ordered administration headed by the doge, an elected leader whose powers were minutely defined by the Venetians constitution.

The Grand Canal snakes through the city creating 6 districts (San Marco, S. Polo, Castello, S. Croce, Dorsoduro and Cannaregio), and the splendid facades of the palaces that crown its banks testify to the city's history of immense wealth. Although their external decorations vary, the palaces share the same basic structure: the most decorated floors, the grand floor, housed luxurious salons used to entertain visitors; on the ground floor were stored the goods of the rich merchant families, and the upper floor housed the family during the winter. They were built with impermeable stone supported by timber pile that do not rot in the water lagged subsoil because there is no free oxygen that causes decay.

Covering the Grand Canal by boat you can re-lived the enchanting of the old Lady, observing the lavish façades and their different styles. The influence of the Byzantine world is identifiable by their ground-floor arcades and horseshoe-shaped arched open galleries of the first floor and by their roundels with leaves or palm trees motifs. Gothic palaces are numerous in Venice: this style was characterized by the use of pointed ogee arches and carved window heads, trefoil and quatrefoil patterns (the most famous example is the Doge's Palace). During the Renaissance houses were often built in sandstone rather than traditional brick: lavish stone carving, a rounded central arch flanked by narrower side openings and bold projecting roof cornices are a features of this age. The exuberance show the influence of Baroque style: revelling in bold ornamentation that leaves no surface un-carved, cherubs and grotesque masks animate the main façade of buildings; recessed windows and massive blocks with deep ridges give solidity to the lower walls.

Ask a question
Member Since 2001
Francesco is a Premier Host·The owner or manager of this property consistently provides great experiences for their guests.