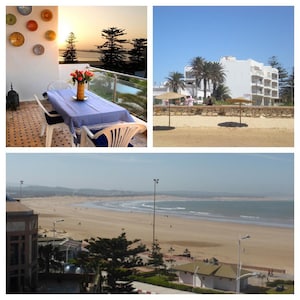 Essaouira: flat with view on the beach, Mogador island and the Medina

Unique and exceptional! On the 3rd and last floor, with lift.

The bed in the bedroom is 140 by 190 cm, for 2 people. Quality bedding brand Simmons: frame and mattress. The sofa bed is also Simmons, 140 by 190 cm. The person who welcomes you and hands over the keys can change the sheets, if you want, after every rental week. If need be, she is at your disposal to ensure you the most enjoyable stay. Sheets changing and washing are included in the rental price.

Essaouira harbour, its croissant-shaped bay and its colourful buildings... The perfect place to flee the crowds of Marrakech and to discover another Morocco. This bohemian feel enclave is the ideal solution to the family holiday’s dilemma: farniente on the beach or educative excursion, you just have to choose. A few years ago, Essaouira found back the aura it had during the sixties. Concerts, festivals, artists’ studio inside white and blue buildings, architecture mixing Arab and Mediterranean influences, cooking...

Lose yourself in the narrow streets of the city. At the bend in one of them, between a large door and the blue shutters flapping because of the Atlantic wind, you will feel like in a movie set. Memories from the past, the thick Portuguese ramparts of the Skala and their cannons pointed towards the open sea reflect an ancient battle. Its medina, where you can find the souk, is on the UNESCO's World Heritage Site list. It is not surprising if great directors used it as a location film: Orson Welles in 1959 for Othello, Olivier Stone for Alexander in 2003, or Ridley Scott for Kingdom of Heaven in 2004.

A place for relaxing

Essaouira, known as the 'African wind city', is very famous for windsurfing and kite surfing. Of course, if you are not a fan of the wind, you can ride a quad bike, a horse, a camel and set out to conquer the dunes. However, if you wish, you can go on a walk along the beaches...

After a long day, nothing is better than a bit on relaxation. Go to the square Moulay EL Hassan, in downtown Essaouira, you will be enchanted by the muezzin's calls to prayer. In front of the sunset and after so many activities, savour a Turkish coffee and traditional pastries prepared with argan honey. What a wonderful way to end the day!

You have to see the amazing views from the terrace of the restaurant Casa Véra, over the harbour and the beach of Essaouira's bay, and the view from the restaurant Taros. Both are located on square Moulay.

Ask a question
Member Since 2012