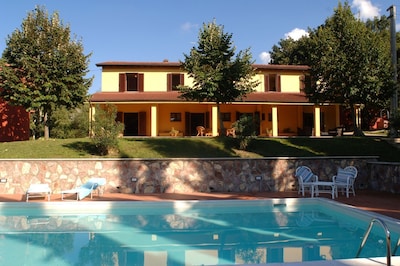 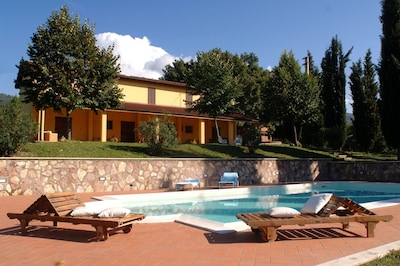 Check in after: Flexible
Check out before: 9:30 am

Stroncone is easy to reach from both the north and south along the A1 motorway (exit at Orte) or taking the E45 expressway, which goes from Cesena to Terni via Perugia.

Villa Umbria is just 5 minutes from the centre of Stroncone.

In addition to being located a few kilometers from the most famous Umbrian towns such as Spoleto, Todi, Orvieto, Assisi and Perugia, Villa Umbria also offers the opportunity to visit some of the most beautiful and evocative spots of this region. One of the most interesting places, from a naturalistic point of view, is without a doubt the Marmore Falls: 165 metres in height, they are the highest waterfalls in Europe. It is possible to do a lot of sport near the falls, such as biking tour, sport climbing, caving as well as canoeing, rafting, canyoning and hydrospeed.

Other important naturalist targets are the Alviano WWF Reserve and Lake Piediluco, the second larges lake in Umbria, where you can hire sailing boats, kayaks and small motor boats.

One historical and artistic location that is worth mentioning are the Roman ruins of "Carsulae" in the immediate vicinity of Terni, along the original tract of the via Flaminia, an important communication route linking Rome to the Adriatic coast during the Roman Empire.

For lovers of food and wine, as well as being able to choose one of the excellent restaurants in Stroncone, including "NascostoPosto" one of the best in the entire region, there is the opportunity to taste the extra virgin olive oil produced by the owners of the estate and to visit to the award-winning winery "La Palazzola".