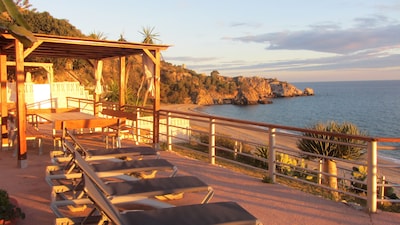 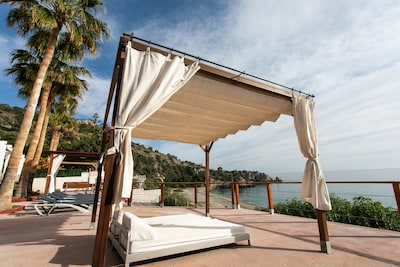 Since the international airport of Malaga until the house for 95% of the ride at highway.

Access to this site banned from motorized vehicles. For the tenants were provided special authorization to be able to access by car.

Nerja is 50 km from Malaga on the site of the easternmost region on the border with the province of Granada. For the mild climate you can enjoy this area attractive throughout the year. The cliffs, bays and capes of its coast as well as the people, which has kept the atmosphere of its Moorish past, have attracted many visitors and artists, who have found merit in Nerja, to make his permanent residence summer. Here is still calm and relaxation.

3 km in the direction of Granada is the famous cave near the town of Nerja Maro. Have been discovered cave paintings and other remnants of the Old Stone Age who have some 30,000 years. The fascination of the natural stalactites and stalagmites of the eight rooms of this cave must be added the adjustment of light and are made to the reception of visitors. Besides all the summers are organized a festival of music and dance in the interior of this very crowded place of interest from Spain

Nerja cultivates its traditions: the Popular Party, Easter, the festival of San Isidro on May 15, the Day of San Juan on June 23, the procession of Mar del Carmen on July 16 and between 9 and 12 October festivals employers. As a specialty of note is the cultural festival in the Cave of Nerja