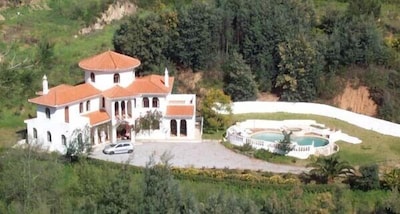 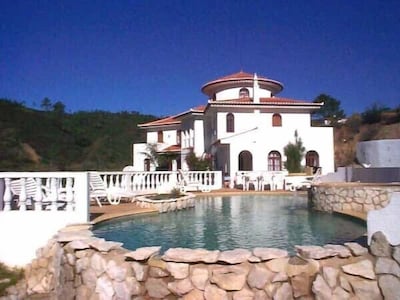 We have lived in Ventnor on the Isle of Wight (UK) most of our lives. We have a son, Chris who was born the same year as Quinta da Mimosa was being built for us and his earliest holidays were spent there.

Alan Philpott purchased this Villa in 1993

In the late 1980's, together with Alan's mother the couple discovered this idyllic piece of the Algarve countryside set amid beautiful Mimosa trees and with an ancient ruined farmhouse. In those days, foreigners were not allowed to own much more than an acre of land in Portugal, so the only way they could purchase this old farm was to set up a Portuguese company (Quinta Mimosa S.I. Lda.) of which the family are the only shareholders. The old farmhouse turned out to be beyond repair so Alan set out to design a new house to be built nearby, leaving the ruin as a feature in the garden. His sketches were made into working plans by a local architect and engineer and builders commenced work on the site in 1992. The house was completed in 1993. Quinta da Mimosa is still the family's holiday home and they make it available for others to enjoy when they are not using it themselves.

Quinta da Mimosa is located in such a beautiful part of the Algarve countryside. It is an almost magical spot, set among the mimosa trees, with the small river babbling its way through the hillside on its journey down to the coast. In the house or by the pool it is so secluded you can imagine you are miles and miles from civilization and in a world of your own, yet only 200 yards away are nice restaurants in the hamlets of Pocigais and Baraccao. Virtually all the forested hillside within your view belongs to the villa and it is within the area of outstanding natural beauty, the protected Algarve Eco zone. As well as the mimosas, there are old orange and lemon trees, olives, cork oaks and the pretty Arbutus trees whose strawberry like fruits are used to make the strong 'moonshine' like spirit known as Medronho that is loved by the locals. Sitting on the patio on a clear night, the stars sparkle so brilliantly you could be watching a firework display (even more so if you have too much medronho). The house was designed to be and is, spacious and airy. Driving from the motorway the 12 km of winding road gives the illusion of being up in the mountains but it is only about 350 feet above sea level in the picturesque foothills. It is just high enough to benefit from slightly cooler air in the scorching summers, but not so high as to suffer from cold mountain air. The house will accommodate more people but it is ideal for 8 or 9 who have plenty of space to spread out and not be under one another's feet.

Languages:
english, We do our best to translate emails and replies.