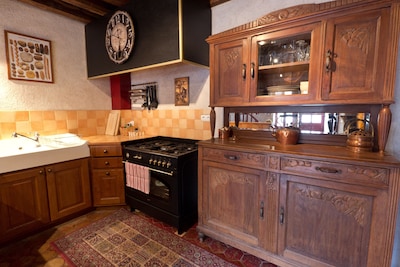 Michael & Christie Shaps reside in the United States in Virginia where they own a winery. Michael studied winemaking in Beaune in the 1990s. While Michael is a renowned winemaker in Virginia, he returned to Burgundy in 2005 and purchased a house and winery in Meursault, an ideal place for him to call his home-away-from-home and produce Burgundian wines. The Shaps' rent their house, called Charmelieu, and produce wine under the name Maison Shaps.

The Shaps' chose this property because Michael wanted to return to Burgundy where he studied winemaking. Meursault's reputation as a top wine producing village, and it's quintessential French charm made it the ideal place to renovate a house and winery.

Charmelieu is a home-away-from-home for the Shaps family. The exposed beams and stone fireplaces add character, while the modern bathrooms and kitchen add convenience and comfort.