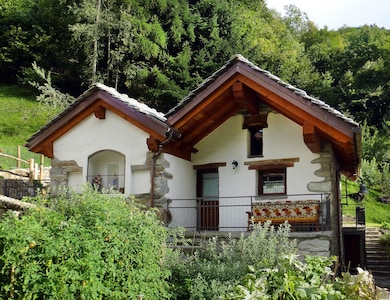 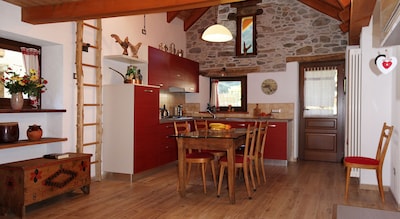 The master offers the possibility of a twin or double bed. This room offers direct access to the garden and woodland beyond. There is also a cot. The second double is characterized by its exposed timbers, stone and mezzanine. In the front room there is a comfortable sofa bed that can be unfolded.

At 760m, Fontainemore is a year round destination and its idyllic riverside setting makes a great base to explore the Gressoney Valley, the largest in the province. The historic centre feels timeless as the Lys tumbles under the extraordinary ponte Romano on its journey down from the imposing Monte Rosa glaciers. Around the church and plaza the chatter of Patois can be still heard above the villages many fountains. From here, a myriad of ancient pathways connect nearby hamlets with breathtaking architecture – Chemp, Perloz, Farettaz – and fairytale design - houses built into the rock or atop ‘mushroom stilts'.

Nature here has also left its indelible mark as the Lys carves its way through some of the valley's narrowest parts. Dramatic bridges like Ponte di Moretta span tight gorges and canyons (Orrido di Guillemore) and have carved out rock pools perfect for summer bathing.

The ingenuity of man can be admired via spectacular 'Incan-style' stone terraces that counter the steep sided valley; mule trails pass through and beyond to abandoned ‘ghost villages’. Many still house furniture and tools, acting like museums to a bygone era. Successive generations descended the hardships of the higher slopes, leaving there legacies and livelihoods behind.

The forests, however, are still foraged by locals and animals alike. Here you can find precious porcini mushrooms or witness wild boar and deer in their natural habitat. Most days you can expect to see 'cerbiatti' from your garden. By November, leaves change colour and the scent of roasted chestnuts infuse with conifer on the breeze. It is the last chance to stock the larders before the first snows arrive.

In the higher pastures, shepherds cling to an ancient way of life where cheese and dairy can still be bought at source. With the snow-melt, spring flowers return along with the cattle. By season’s end, the Desarpa (returning from the mountains) is one of the most spectacular Valdostanan sights.

Beyond the pastures lies a wonderland of Alpine lakes and access to some of the best long distance trails in Italy – Alta Via, Tor des Géants, etc. The nearby Monte Mars Reserve and Coumarial provide some of the best back-country skiing, trekking (including a Via Ferrata), snow shoeing and mountain biking in the region.

Ask a question
Member Since 2017

I'm Silvia, I have a passion for wilderness trekking, adventure and foreign travel. I love meeting new people and cultures, especially those with little contact of the “outside world”; it can be like opening a new book. Some of my favourite places include the Andes, the Gran Sabana in Venezuela and the great Tibetan Plateau. I also love to return home and feel lucky to be blessed with such a backyard. Languages are another passion of mine and I've been dragging out a linguistics course over the past decade. If you speak Spanish, French or English, then I would love to learn a few more useful phrases. I live near to La Maisonette, one floor above my mother, a true Valdostana. Unlike me, she is indestructible, feels no cold and can be seen daily tending to her vegetable gardens or cooking polenta over a hot fire. Mariuccia, aka “Patch” has a wealth of stories, knowledge and experiences passed down through the generations.