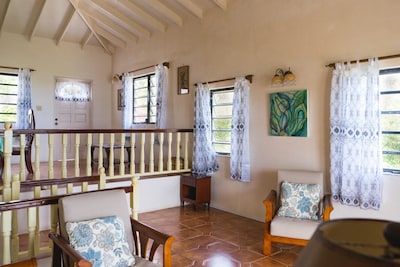 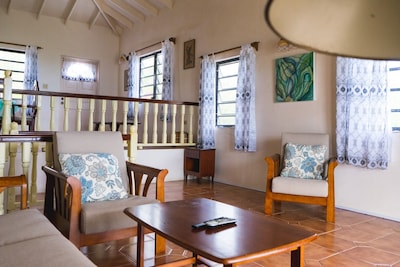 The photo above is of Jean Michael. I was born in Trinidad of an Antiguan mother and a Dominican father, grew up in England, spent 10 years in Germany, returned to England and emigrated to Antigua with husband Rolston in 1995. Rolston (I'll put up a picture of him later) is born of Antiguan mother and father. Our parents grew up together and met up again in Trinidad. During the years between UK and Antigua, they kept in touch - good friends forever.

You can trust Willoughby; we built it with the skills of local tradesmen. Rolston bought the land at a time when Antiguans were not buying seaside land. Willoughby Bay does not flood; even during hurricanes, the high water mark is well below the level of the house, so you will be quite safe. Views from the east verandah are superb.

Willoughby Bay has the reputation of being one of the most beautiful and unspoilt bays on the island. It's a relatively short drive to fine white sand beaches. Foodies have their choice of Italian, French, Chinese, Syrian, Japanese cuisine and many other nationalities.