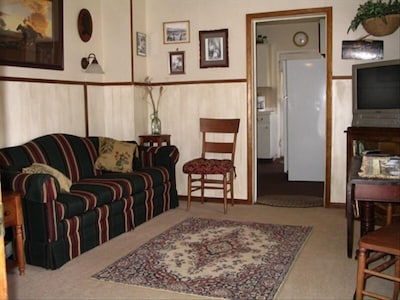 Hosted by George and Lynn Wood

About George and Lynn Wood

George and Lynn are not Colorado natives, but this is Home. George first came to Colorado to attend the USAF Academy in 1965. After graduation he was briefly stationed in Colorado as a young Intelligence officer prior to his assignment to Korea. After Korea and training in counter-insurgency, George served in Southeast Asia. His next assignment was in Hawaii where he met and married Lynn, who had been teaching at the University of Hawaii. A son and daughter soon rounded out their ohana. In 1978, a visit with friends in Colorado convinced them that this was eventually to be their permanent home. 14 years later, after living overseas, experiencing many cultures, and watching the Soviet empire fall, they finally made it to Colorado! They originally bought their Woodland Park and Cascade houses in 2002 as long-term rentals, but found that converting them to comfortable refuges for vacationers offered them better opportunities to meet and interact with great families from all over the world. George is now retired; he and Lynn have raised and shown some wonderful Bernese Mountain Dogs, in addition to having the honor and pleasure of hosting many visitors to our corner of paradise.

George and Lynn Wood purchased this House in 2002