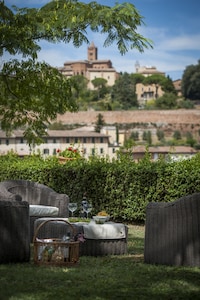 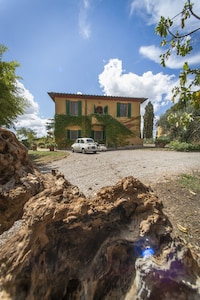 Typical apartment in a Tuscan villa, well renovated, for two people, with the possibility of adding a room for two more people with a double bed.

Santa Chiara is a farm located in an incredible place: on the outskirts of Siena, the center, Piazza del Campo can be reached on foot in less than 15 m and at the same time surrounded by 9 hectares of countryside! The ideal place to spend an unforgettable holiday: rest and relaxation in the olive grove with swimming pool, and a medieval town famous as Siena and its Palio to be discovered and close at hand. Florence, Monteriggioni, San Gimignano, Volterra, Montalcino, Pienza, Montepulciano, Pitigliano, Arezzo, Perugia are all small or large cities of art known all over the world and all within an hour's drive or less!

Golf: located on the slopes of Monte Calvo and until a few decades ago it was an important mining center. It is only 15/20 km from the sea

The golf course of the Golf Club Toscana was inaugurated in 1999 and was designed by the American architect Keith Preston. This is an 18-hole course with par 71 which, in 2003, was included among the 10 best emerging Italian fields. On this path, which winds through the green hills of the Tuscan Maremma, players are called to play extremely careful in order to maintain their standard as many of the holes conceal pitfalls that can easily negatively affect the final score. The fairway, also thanks to the abundant amount of water available to the Golf Club Toscana, always presents itself in optimal conditions even in the summer months. Along the route, and exactly in eleven of the eighteen holes, one or more obstacles of water is detected, other holes are bounded out of bounds, others still present the obstacle of numerous bunkers, while on all the green areas are found with double or triple slope, which makes difficult to read the shot to be made, and a double cut of rought that requires particular precision in the game. All these elements combined together make the journey challenging and enjoyable for both the beginner and the player with more experience.

To the province of Grosseto belongs. The Regional Natural Park

Ski: The summit of Mount Amiata is at 1738 meters.

The resort offers 12 slopes with 8 ski lifts for alpine skiing and 3 slopes for excursions with snowshoes or snowshoes can be made both in daytime and in night.

As for night-time excursions, the duration is an hour and a half up to three hours and includes departure from the Albergo Generaggiungendo la Vetta in a more peaceful way through the ski slopes or in a more adventurous way through the Faggeta, depending on the group capacity.

After having conquered the summit, the return through the route of the Old Slit (wooded cutting of the first Amiata ski lift) allows a fun descent at the 2nd Refuge - Cantore.

Remember that excursions must be booked.